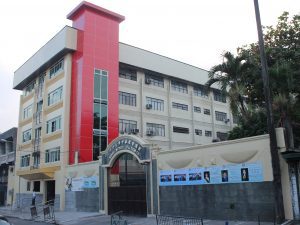 The history of the Philippine Institute of Quezon City goes back to the end of World War II. Just as soon as our country’s democracy was re-established, the rekindled spirits of a group of Filipino-Chinese enthusiasts formed and organized the Filipino-Chinese Chamber of Commerce Quezon City (FCCCQC).

After building a strong foundation with orientation to business, community building and the assimilation of Chinese culture into the Filipino society, part of the Federation’s grand plan was to build a stronger pillar that is mainly focused on Filipino-Chinese Education.

This grand plan came about in 1964 when the founder, Mr. Alfredo Matti, finally acquired the licensed approval from the Department of Education. This is when the
Philippine Chinese Institute of Quezon City (PCIQC) was born and established.

The school’s academic program started on the Elementary level for both English and Chinese classes. At this time, the school was only housed on a two-storey wooden building, yet, the real foundation of the school came from the hearts and dedication of its founding members led by the first Principal, the Honorable Tan Chiu Zong, where the school was already able to attract hundreds of students in its first year of operation. Since then, the school progressed with continuous improvement of its curriculum, setting up the institution to the pillar that the founders dreamt of.

In 1971 and 1974, the school underwent two devastating fire incidents respectively. But with the perseverance of the FCCCQC members and the strong support of Dr. Lucio Tan, the school was built once again and the name was changed to Philippines Institute of Quezon City (PIQC). From then, like the legendary phoenix, the school rose from the ashes and became more resilient than ever. The fire may have destroyed the building, but the foundation was already strong enough to rise up and continue what is has started for its students and the community.

Through the years, the school is very well supported by Mr. Francis Chua, the FCCCQC board officers and members, PIQC Board of Trustees, PIQC Alumni Association and many other kind-hearted philanthropists, not only financially, but also with a strong moral support with their constant motivation and hands-on involvement from regular boarding and their non-failing presence to attend major events like Teacher’s Day, Foundation Day, and Graduation Day.

PIQC since then has been continuously upgrading its facilities starting up with the installation of air-conditioning units in all of the classrooms, renovation of the auditorium, putting up of different laboratories, libraries, dining areas, offices and many more.

This 2015, in line with the new school system guidelines of Department of Education, PIQC will be starting its Grade 11 and Grade 12 programs through their extensive curriculums, not to mention the usage of the new e-learning room for the adaptation of the rapid change of technology in this generation.

The grand plan is very much alive, and building this strong pillar does not stop.
Much has progressed from a 2-storey wooden building, and the dream continues to be fulfilled.