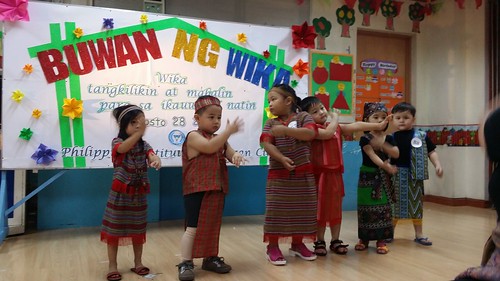 In our objective to familiarize the children to our National Language and at the same time spark the spirit of nationalism in them, the pre-school department celebrated Linggo ng Wika with a sense of pride as they come to school in their native costumes with each level representing the three big islands of the Philippines.
The children started the program by showing-off their costumes by having a mini-parade at the PIQC auditorium where each of them were judged according to the island they were representing. From there, we chose 2 winners for each class for Best in costume. After each level is done presenting their costumes the preparatory pupils began preparing for their number as they join grades 1-3 for the singing contest.
Meanwhile, the program at the pre-school department continued where teachers and pupils of each level showed-off their talents as they enjoyed dancing and singing to the tune of different Filipino songs.
The program concluded with the announcement of the winners for Best in Costume for each class, and then they parted to their own classrooms to have their snacks. But, just when they thought that the event is over, we let each class play a Filipino game where the children received more prizes!
Indeed, the day was a tiring one for everybody especially for the teachers but because we made sure that each child will go home with a smile on their faces, it was all worth it!