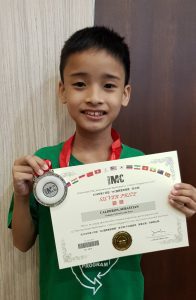 Also from the MTG website, another article was wtritten by Mr. J. Esplanada , “…The Philippine team has beaten Asian mathematics powerhouses China and Taiwan to emerge as overall champion in the Singapore International Math Contest (IMC-SG), held July 27 to 30 in the “Lion City.” The young Filipino numbers aces from public and private elementary and high schools nationwide won a total of 197 medals: 27 golds, 54 silvers and 116 bronzes in the 14-nation contest…”. Among those awardees, a representative from PIQC, Sebastian Barcelona Calderon of Grade 5- Honesty bagged a Silver Medal.

Congratulations. The whole PIQC family is proud of you!