The Class Night started with a registration at 6:30 PM in the students’ respective room assignments. After the registration, the students proceeded to the Auditorium for dinner and student presentations from the different grade levels and sections. About twenty teachers joined the activity. This was followed by guidance sessions at 8:30 PM.

Ms Neia Ng of Grade 10 Responsibility gives a description of her experience about the class night.

“The night started as we opened our homemade packed dinners and meals bought from fast-food chains. Everyone seemed to chatter with the people we’re seated with, until different grade levels started to perform their presentations. Various performances bloomed delectation that made each individual bring warmth to the auditorium. 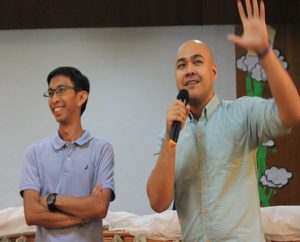 We were asked us to pair with the people we have chosen to be with. The first activity was arm wrestling with our partners using our right arms in a minute followed by our left arms. After identifying the winners for each of the left and right arms, the facilitator asked us to wrestle with both arms at the same time summing up the number of times our partners won each round. The activity was followed by a refection, explaining how this is metaphorical to our lives. He explained that our lives are categorized into four divisions: the win-win, lose-win, lose-lose, and win-lose situations. For me, this is an activity where we learn how to give-and-take in different life’s situations in the simplest way possible. However, there are times when we give but there is nothing that we get in return. When we give, we should not always expect something in return.

After the paired-activity, we were asked to group ourselves into ten. Every group of ten were tasked to bring the plastic cup to the other side of the auditorium using our pinkies in various ways, having a restriction of only touching the outside of the cup. Different groups had different strategies aiming to reach the other side in the fastest way possible following the simple instruction which is: no touching the outside of the cup with only the pinkies. The activity was a test for integrity. We followed the direction because the facilitator was watching very closely. In life we will go though many experiences where our integrity will be tested. Integrity is doing the right thing even when no one is looking. This activity brought enjoyment especially to our group, as we didn’t just aim to win but to also had fun.

During our free time from 10 -12 PM, some played basketball and volleyball, some stayed in the quadrangle, some took pictures around the trees decorated with lights, some stayed in their designated rooms and played games, and some applied face masks onto their faces. It was a night filled with adherence with friends, making this night a memorable one.