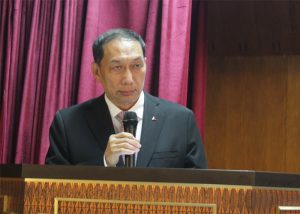 The Chairman Emeritus of the Philippine Chamber of Commerce Inc (PCCI), Dr Francis C Chua, was the guest speaker during the PIQC Parents’ Orientation held on June 8 at the PIQC auditorium.

Dr Chua first thanked the parents for making the right decision of enrolling their children at the PIQC. He said that the Ateneo managed by Jesuits offers the best education. The systems and procedures which are now in place at PIQC are adopted from the Ateneo High School where the current Principal spent seventeen years of teaching. He compared the enrolled students as riding in the business class section of an airline but paid for the economy fare because the tuition and fees at PIQC is much lower than that of Ateneo or Xavier School, another Jesuit School. Dr Chua further said that the school is headed by a Chinese scholar in the person of Mrs Lee Shu Hwei.

After his speech, Dr Chua was presented with a plaque of appreciation. One of the recipients of the Dr Francis Chua award, Althea Ty, was also presented to him. 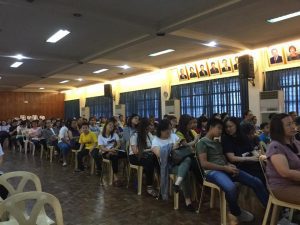 The parents were requested by Dr Chua to cooperate with the school by answering the PAASCU datasheets which will be released by the school thru their children. The PAASCU accreditation would mean the recognition of PIQC as an excellent school.

After the speech of Dr Chua, the Principal, Marissa F Ayson, presented the school’s philosophy, vision-mission, strategies and objectives. She appealed to the parents for patience and cooperation. The APSAF, Mrs Janette Ty, and the APAA, Liezyl S Tamayo, also gave updates of their respective areas.

After the program, the parents proceeded to the classroom of their children to meet the students’ teachers for the year.